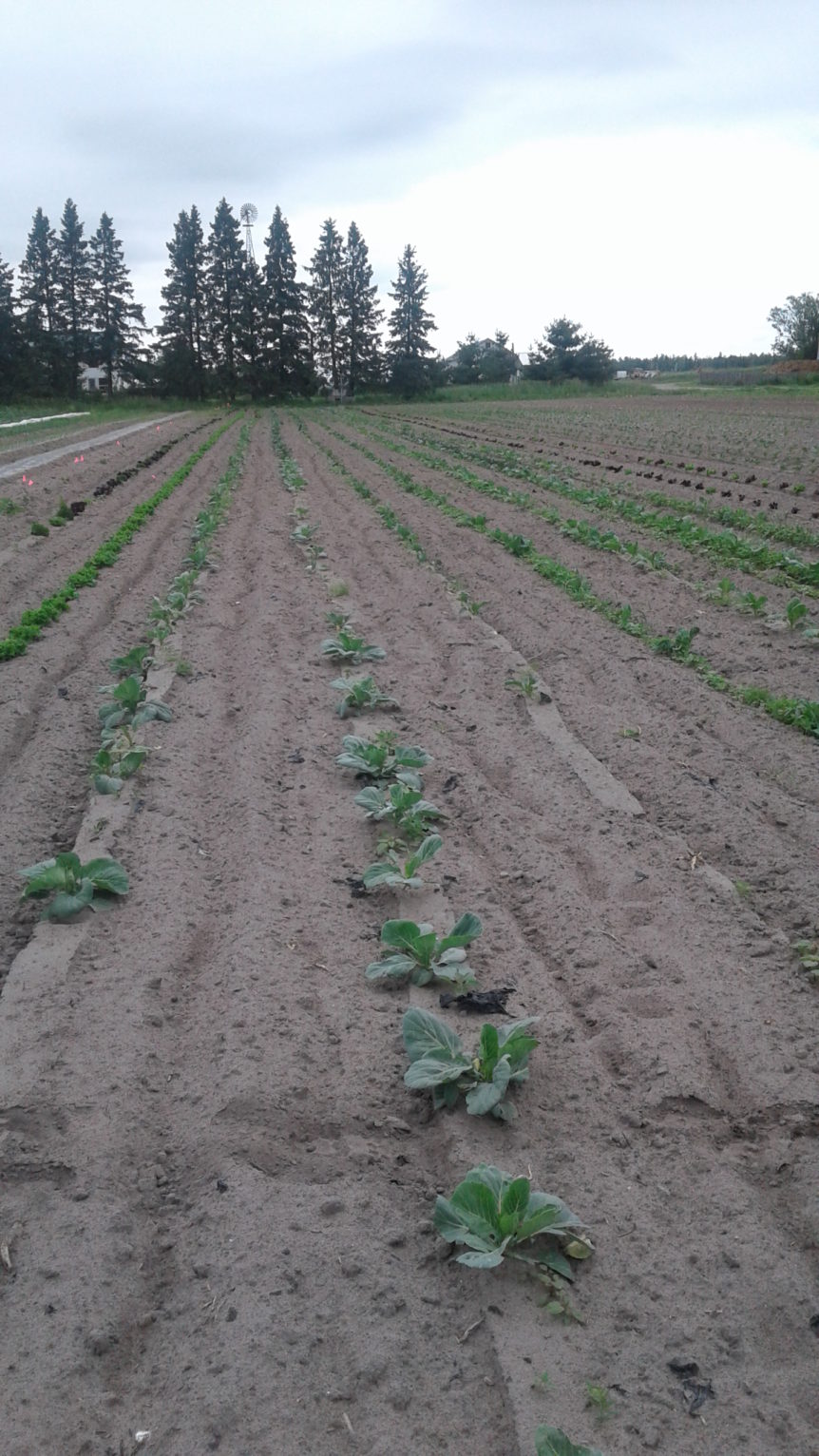 Since the 1850s, air pollution provided enough sulphur for crop production in Ontario, except in the northwest. As the world has been decreasing industrial pollution, some plants may need sulphur as a fertilizer. Ontario does not have a recommendation for sulphur application. Since brassicas are a group of non-leguminous crop that have a high sulphur demand and grow well in Northern conditions, a trial was developed to see how these brassicas would respond to the sulphur. Three brassica crops were picked to represent Algoma producers accurately; canola for cash croppers, cabbage, broccoli, and cauliflower for market gardeners, and a forage brassica mix that could extend grazing season for livestock producers.

The first part of this trial dealt with brassica vegetables and the effects that sulphur had on them. Cabbage, broccoli, and cauliflower were chosen because they are very common with most market gardeners in Algoma. and are in the brassica family. There were two site locations in Algoma; one location was strictly looking at cabbage, while the second location was looking at all three vegetables. The first location as in the Township of Johnson where one variety of cabbage was monitored. The grower had the cabbage started in a greenhouse, and then after several weeks transplanted the small plants in paper cups into the ground on June 5th-12th. The cabbages were planted into four blocks, with each block receiving rates of 0 kg, 12 kg, 24 kg, 36 kg, and 48 kg of elemental sulphur. This location had serious cut worm and flood problems. The cabbage did not produce well, and therefore sampling was not completed as there was nothing to measure. Before the flood, treatment four (36 kg/SO4) seemed visibly larger; however, the flood and cutworms destroyed most of the plants, so sampling was not completed.

The second location of this trial was on Hwy 17 in Tarbutt Township where all three vegetables (cabbage, broccoli, and cauliflower) were monitored. This location not only looked at the effects of sulphur on vegetables but also at the effects sulphur would have on vegetables when it came to storage longevity. Three plantings occurred, where varieties “Blue Vantage”- Cabbage, “Bishop”- Cauliflower, and “Diplomat”- Broccoli were monitored. Each planting/block received rates of 0 kg, 12 kg, 24 kg, 36 kg, and 48 kg of elemental sulphur. At harvest time (determined by the producer), ten vegetables out of each treatment were measured for height and circumference. This was done for all vegetables in all three plantings. Results were analyzed, and showed that treatment three (24 kg/SO4) and treatment four (36 kg/SO4) produced taller broccoli and cauliflower, and wider cabbage. Plants in treatments three (24 kg/SO4) gained 0.24 kg; treatment four (36 kg/SO4) gained 0.74 kg; whereas treatment five (48 kg/SO4) only gained 0.22 kg when comparing it to treatment one (0 kg/SO4).

Even though there was no evidence of the sulphur effecting the storage longevity, producers may want to consider applying sulphur to some brassicas as it did produce taller/wider cauliflower, broccoli and cabbage.

This project was funded in part through Growing Forward 2 (GF2), a federal-provincial-territorial initiative. The Agriculture Adaptation Council assists in the delivery of GF2 in Ontario.