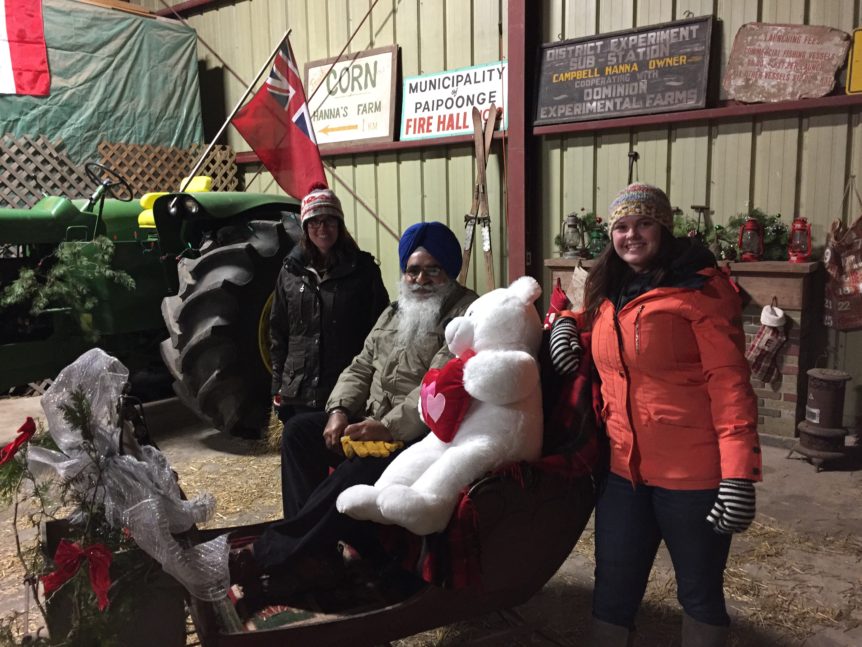 RAIN was invited to Thunder Bay to the Thunder Bay Agriculture Research Association’s AGM by Dr. Tarlok Singh Sahota and Andrew Brekveld to talk about the new micro-grant program SNAPP, as well as the Cross-seeding Forages Project that RAIN and TBARS are collaborating on.

December 4th – Upon arrival in Thunder Bay, Dr. Sahota gave a guided tour of the 36 acre research station. The next stop was TruMar Farm, one of eight dairy farms in Thunder Bay District using robotic milking machines. After touring that facility the RAIN team had the opportunity to visit a diversified cropping operation run by John Hanna. He had invested in his own seed cleaning equipment, and also operates a small feed mill that produces two mixes – one for cattle, the other for poultry and hogs. The locally produced feed saves farmers money on transportation costs. For the holidays, Hanna runs a “cut your own Christmas Tree” business. Christine, Mikala and Tarlok had an opportunity to have their picture taken in the antique sleigh, available for the customers getting their Christmas Trees at the Hanna farm.

December 5th – The TBARA AGM started at 10 am in Murillo.  Dr. Sahota shared some key results from TBARS work over the past growing season, as well as future project ideas. The Thunder Bay Soil and Crop Improvement Association held their AGM in the afternoon.  During the TBSCIA meeting, Ian McDonald, Crop Innovations Specialist for OMAFRA, spoke on the importance of soil health and the effects of tile drainage. After the meeting, the RAIN team toured Woodstar Farm, where cows are bedded on a compost pack. The design of the barn is the first in Northern Ontario. The area is harrowed twice a day, and sawdust is added once a week. The bedding is very dry, and the cows are very clean. When the compost gets to six feet in depth the barn is cleaned out, and the compost is land applied.

Christine and Mikala met so many amazing people, they learned a lot, got to see a lot of Thunder Bay, and had an amazing time overall.