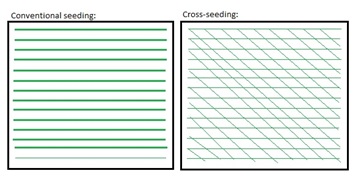 According to the 2011 Census of Agriculture, 18.35% of Ontario’s grazed agricultural land is in the north. This combined total of rough and seeded pasture comprises nearly a third of northern Ontario’s agricultural land use. While rough pastures make use of native plants as forage, many farmers choose to sow domesticated grasses and legumes that produce a higher quality of grazing and preserved feed.

Many of the sown pastures in northern Ontario are established either as permanent stands or part of infrequent rotations. This means that often the cost of a seeder designed specifically for forages is not economical. In this situation, a grain drill may be pressed into service to establish hay or pasture. However, the row spacing on these implements is typically wider than the optimal for forage crops. This can affect the establishment of a forage crop by leaving wide gaps between the rows where weeds can encroach.

Cross-seeding (also called cross-drilling) is a technique for establishing a forage crop where half the seed is planted in a conventional drive pattern using a seed drill. The other half of the seed is drilled at a 45 degree angle to the original pass in order to achieve better ground coverage. Better coverage can help reduce soil erosion and assist sown forage crops to out-compete weeds, resulting in better quality and higher yielding forage crops. 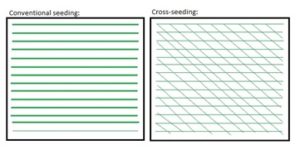 If producers in northern Ontario are seeding with a modified grain drill, reducing the row spacing may not be an option. Cross-seeding might assist newly-seeded forages in achieving more rapid ground coverage. Some soils in this region have been converted to agriculture relatively recently, and may be at higher risk of erosion than those that have been kept under forests or permanent pasture for a long time.

Cross-seeding is a recommended practice in the United Kingdom, and is also used in New Zealand and in arid regions of the United States. The United Kingdom’s Agriculture and Horticulture Development Board report that up to 80% of soil compaction caused by machinery occurs during the first pass. Compaction risk should not be significantly increased by cross-seeding.

The Cross-seeding Forages Project aims to determine if cross-seeding is an economically viable practice for establishing pasture and hay crops in northern Ontario. Researchers from the Rural Agri-Innovation Network (RAIN), the Thunder Bay Agricultural Research Station (TBARS), the Emo Agricultural Research Station (EARS), and the Kapuskasing Demonstration Farm will be working together and with farmers in their regions to test this planting technique. The economic analysis from this project will assess whether the increase in forage yield and quality from cross-seeding is enough to offset the added costs at establishment.

We are looking for farmer cooperators to assist with this project. If you will be establishing a pasture or hay field with a seed drill in 2017 and would like to be involved, please contact the partner researcher in your district for more information.

This project was funded in part through Growing Forward 2 (GF2), a federal-provincial-territorial initiative.

The Agricultural Adaptation Council assists in the delivery of GF2 in Ontario.