Agriculture has had its challenges including changes in market consolidation, which led to a decline in Algoma dairy producers. The bovine spongiform encephalopathy (BSE) crisis and the closure of the US border in 2003 contributed to a reduction in beef producers within the District. In 1981 there were 490 census farms and in 2011 there were 317 census farms, which declined even further to 249 farms in 2021.

A migration of new farmers to Algoma started in the early 2000s as a result of limited farm expansion opportunities and rising land prices in southern Ontario. This has resulted in some of the abandoned and underused agricultural land coming back into production. Farmland in Algoma is particularly desirable due to the close proximity to the urban center of Sault Ste. Marie, with most farmland being within a 1.5 hour drive from the city and accessible by the trans-Canada highway. The following links may provide some opportunities for available farmland in the Algoma area: 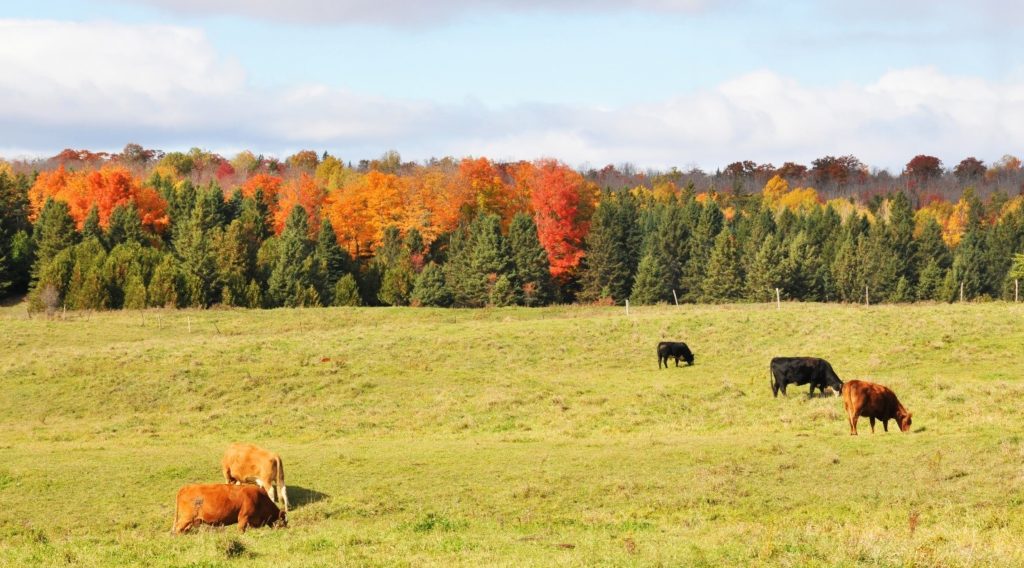 The Algoma region has a very rich diversity of agriculture including everything from raising livestock to maple syrup production. 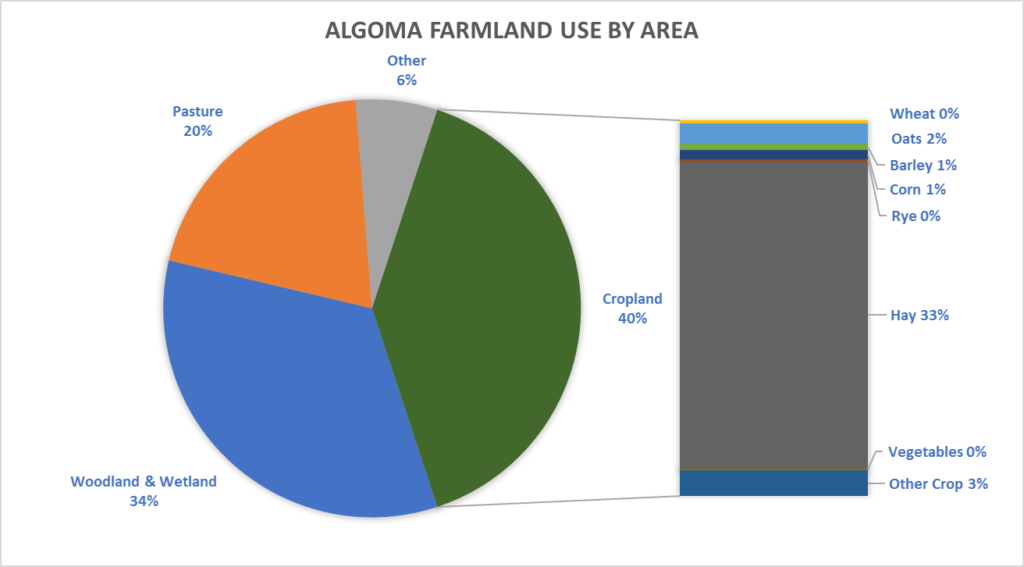 Within Algoma there are approximately 75,000 acres of land currently used for agriculture, which is less than one percent of the District’s total area and down 22.5% from 2006. As shown in the chart above, hay grown for livestock feed is the most common crop in Algoma making up one third of the total agricultural land and over three-quarters of the cropland in current use.

Algoma is particularly invested in the raising of cattle and has close to 65 cattle farms that raise over 2,800 beef cattle and 738 dairy cattle. We also have over 7,000 acres of seeded pasture as well as almost 6,900 acres of natural pasture and over 19,000 acres for hay and fodder crops. Algoma also has over 4,700 acres of alfalfa planted and three farms growing forages for seed.

Oilseed and grain farming is growing in Algoma where we have 244 acres of wheat planted, 1,593 acres of oats, 542 acres of barley, 725 acres of corn (silage and grain), and 104 acres of rye. Vegetable production is also growing commodity with 153 acres being grown, consisting of a variety of crops such as potatoes, sweet corn, cabbage, squash, beans, peas, cucumbers, tomatoes, and many others.

In 2013 a study was conducted on the tile drained land in Algoma that found 1,574 acres of previously tile drained land and another 4,984 acres in need of it. Since then, through RAIN a further 2640 acres of farmland has been tile drained in the Algoma, with 820 more acres to be completed by 2023.

A 2009 Biomass Inventory Study indicated there were as little as 9,800 acres in the immediate area around Sault Ste Marie that were suitable for oilseed or fiber crops, however if land used for hay could be used to grow these crops there could be as many as 89,000 acres of suitable land available. 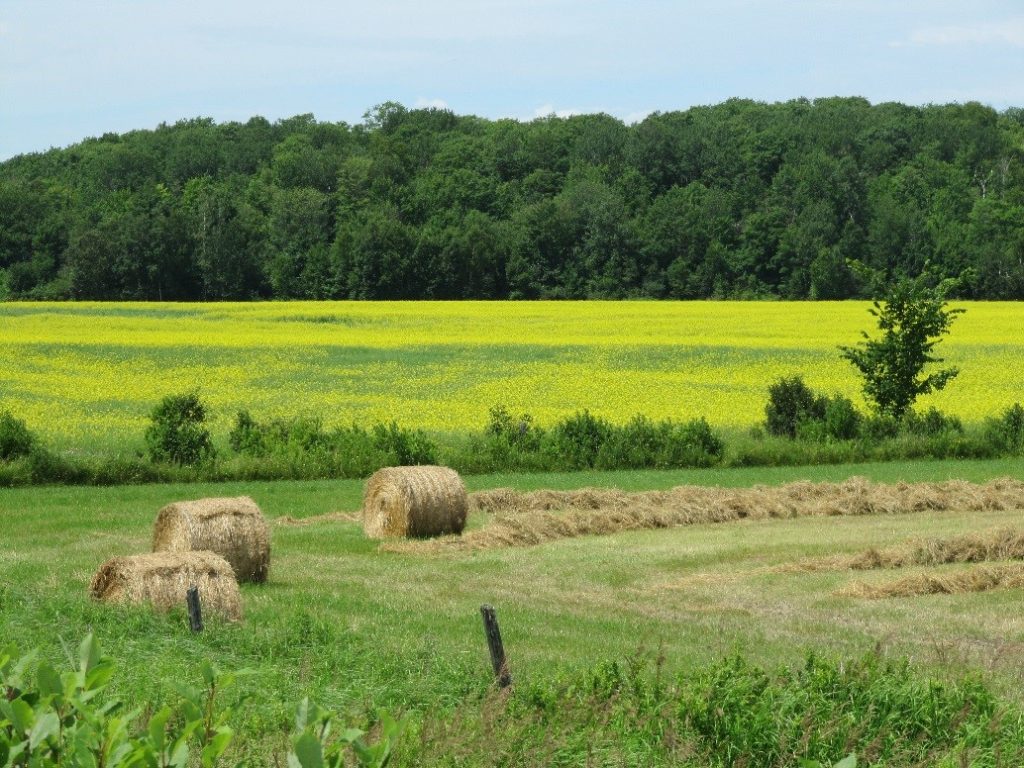 Algoma has a strong infrastructure supporting the agricultural sector comprised of many local businesses and groups.

Food processors in the area include: two abattoirs (Northern Quality Meats and Penokean Hill), and a variety of butchers, bakeries, breweries and wineries. There are also several operating auctions in the area including the Algoma Produce Auction in Desbarats, who welcome any sellers from the Algoma growing community, and the Algoma Cooperative Livestock Sales in Thessalon, which specializes in cattle sales. Located North of Thessalon is also the Algoma Community Pasture which can be utilized by farmers wishing to graze cattle or horses. Rates can be found at: http://www.agr.gc.ca/eng/?id=1298656292836.

For farmers wishing to ship their goods around Ontario and beyond, there are several transportation companies servicing the Algoma region including: Algoma Milk Transport Cooperative, Northern Ag Transportation, and Algoma Central Corporation.

The Algoma region has a wide variety of active associations and groups that help to keep producers connected to one another within their sectors and the community. Some of these associations include:

A list of associations and groups, as well as contact information for each, can be referenced at: http://www.farmnorth.com/district.aspx?district_id=1&view=organizations. There is also a large collection of farmers’ markets carrying locally grown produce, fresh baking, homemade preserves and more spread across Algoma from right in Sault Ste. Marie to Iron Bridge. Some of these include: 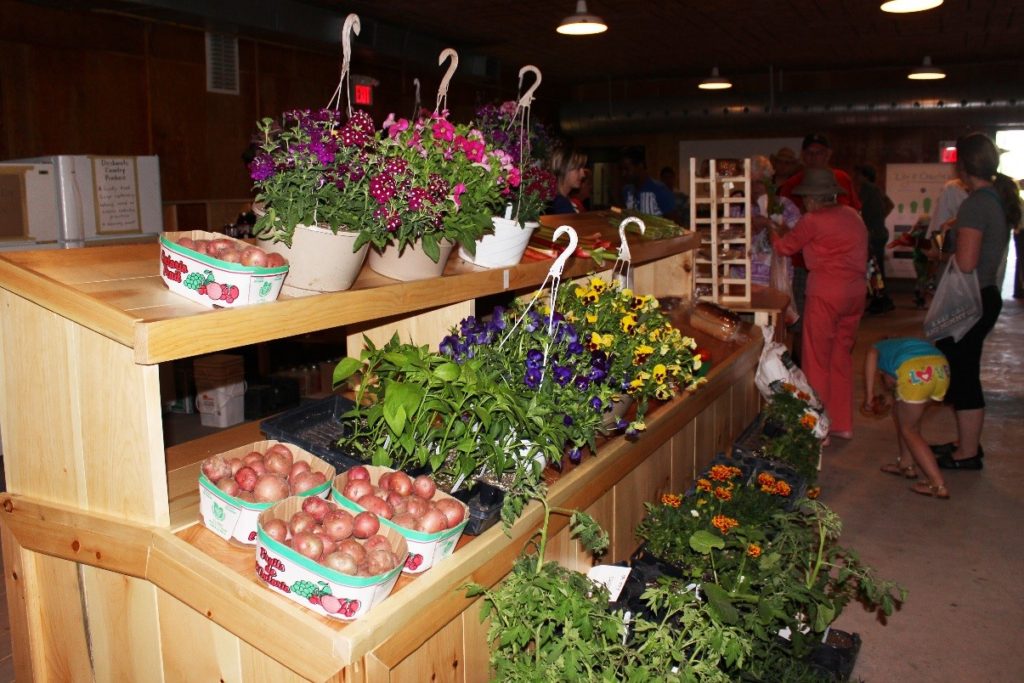 Also popular in Algoma are the fall fairs and agriculture-based events such as the Bruce Mines and Iron Bridge Fall Fairs and the Sustain Algoma Exposition. Also growing in the area is the Buy Algoma, Buy Fresh initiative working towards promoting consumers to buy locally grown produce and products. 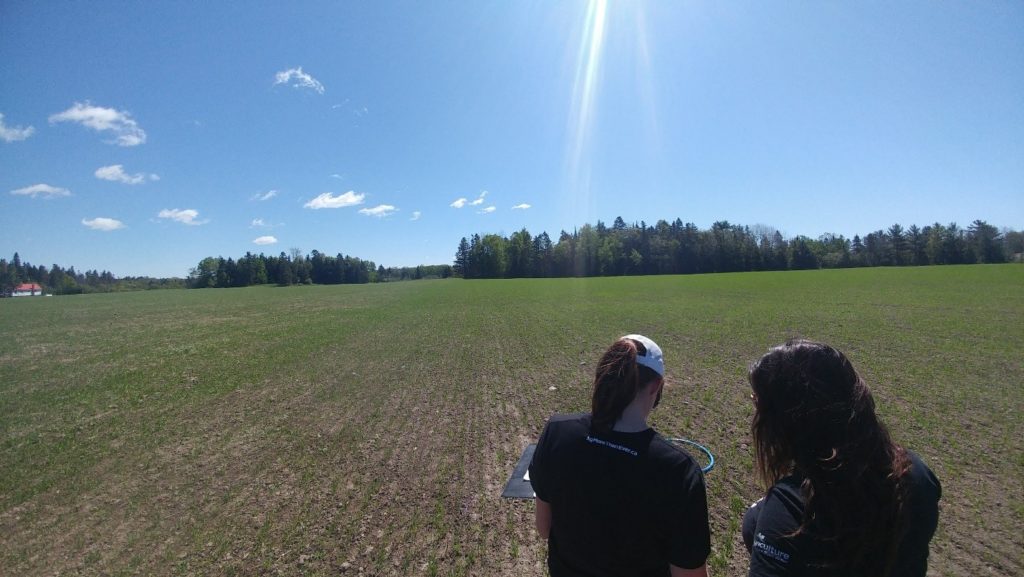