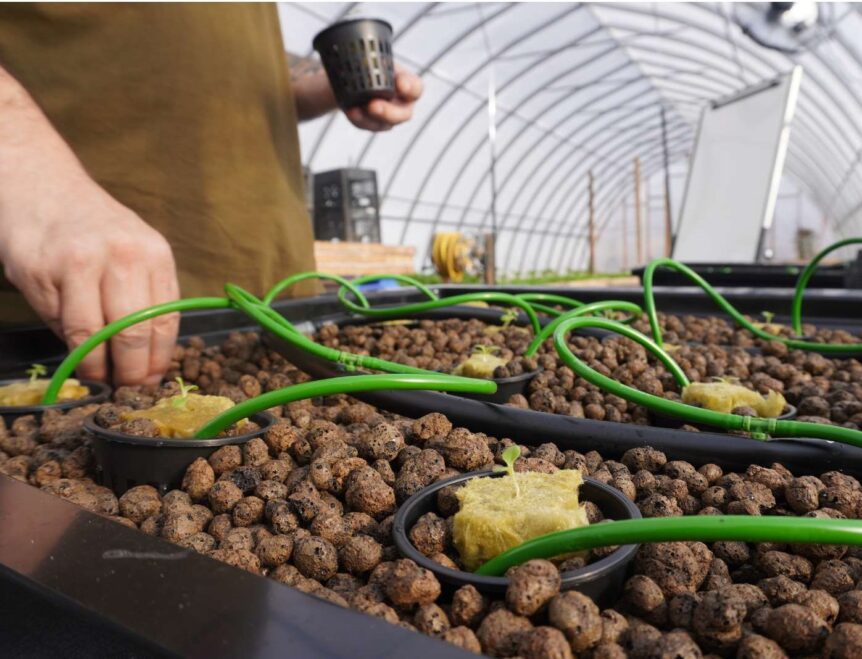 When most people talk about growing plants, one of the first things that comes to mind is soil. However, within recent years more growers have begun to adopt systems that use no soil at all. Hydroponics is a broad term that describes systems of growing plants using a water-nutrient solution to deliver necessary nutrition for plant growth. Rather than the roots being held in soil, inert growing mediums – ones without any nutrient value – like rock wool, peat moss, coco-coir, or expanded clay pellets are used. In some systems, the plants’ roots are simply submerged directly into nutrient-rich water.

Hydroponics has numerous benefits compared to soil-based systems, including less use of fertilizers and soil amendments, less pest and pathogen pressure, the ability to operate in areas where space is limited and to grow in spaces without fertile soil. For this reason, hydroponic growing is a tool that could be used to alleviate food security in places that growing outdoors in soil year-round is not an option due to freezing temperatures. These systems can also be well suited for growing in urban environments since they can be easily operated indoors or on rooftop spaces.

Despite hydroponics being widely applied in greenhouses across Southern Ontario to produce a substantial amount of the food we eat it is not a widely known practice outside of the industry, with many people who have heard of it commonly associate it with cannabis cultivation. Although it may seem highly technical and more complicated than soil-based growing, with a bit of foundational knowledge and the right equipment it can be just as simple. To introduce community members and local growers to these unique growing systems, we partnered with the Lake Superior Living Labs Network (LSLLN), United Way Harvest Algoma, and the City of Sault Ste. Marie to fund and organize a workshop about them. Hydroponics expert Adam Hayward was brought on board to facilitate the event, bringing with him decades worth of experience in the industry.

The workshop’s goal was to introduce beginners to hydroponics and to help them walk away with the confidence that building/using a hydroponics set up is well within their capability and skill level. Over twenty attendees learned all about the basics of soilless growing systems, including different growing mediums, ways of setting these systems up, necessary equipment, plant nutrition, and tips on how to optimize their growing environment. The workshop was organized by our horticultural research assistant Lauren Moran and the system used for demonstration purposes is part of a broader research project being conducted. Trials on lettuce crops will be used to compare the effectiveness of inorganic nutrient solutions vs. organic ones which have been enriched with worm compost tea. We will be sharing the results of the experiment once the research component is complete, so stay tuned!