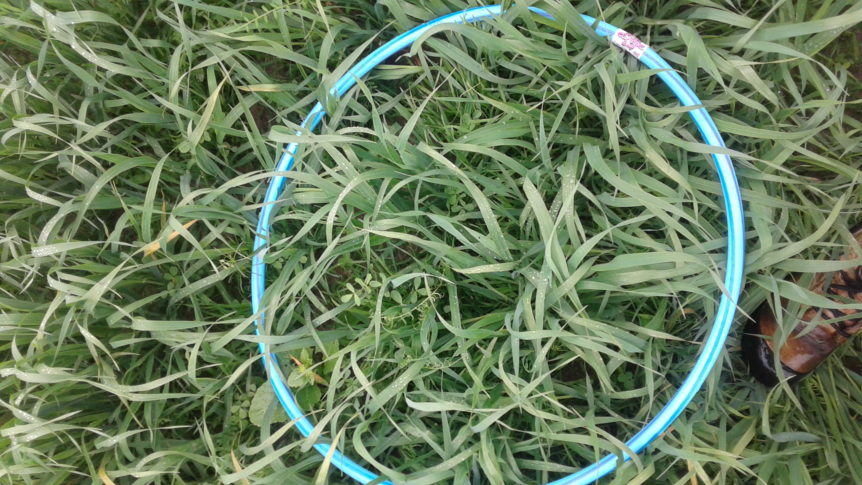 n Algoma, a new technique was demonstrated called cross-seeding (or cross-drilling) this past season. The project aims to determine if cross-seeding is an economically viable practice for establishing pasture and hay crops in Northern Ontario. Researchers from the Rural Agri-Innovation Network (RAIN), the Thunder Bay Agricultural Research Station (TBARS), and the Emo Agricultural Research Station (EARS), worked together and with farmers in their regions to test this planting technique. Cross-seeding is a technique for establishing a crop where half the seed is planted in a conventional drive pattern using a seed drill and the other half of the seed is drilled at a 45-degree angle to the original pass to achieve better ground coverage. The amount of seed and fertilizer does not increase; the inputs are cut in half for each pass. Thus, after completion, the same amount of fertilizer/seed is being used.

There were seven locations in Northern Ontario testing this method. Thunder Bay had two locations, Emo had two locations and Algoma had three locations. In Algoma, all three locations were in co-operation with farmers, where the farmer chose what mix they wanted planted. Both Thunder Bay and Emo had one farmer co-operator and one location at their research station. Depending on the size of the field, half of the field was planted with the cross-seeding technique and the other half was planted conventionally. Some areas in Algoma received twice the amount of fertilizer intended as a result of human error. Monitoring occurred every 1st, 3rd, 6th, and 12th week; % bare ground, % weed species, and % sown species was checked at every location.

A considerable amount of data was collected from all over Northern Ontario.  Although Algoma did not see a dramatic change in yield between the two techniques, there was a significant difference when it came to establishment time and ground coverage. Thunder Bay showed a higher yield on the cross seeded site at the research station. Emo also noticed an increase in yield on the cross-seeded site at their research station. The cross-seeding sites established quicker and showed much better ground coverage. The cross-seeded sites were also noticeably thicker six weeks after planting. A forage quality analysis was taken and the results did not show any significant differences between the treatments.  A second and third year of the trials would prove beneficial as the first year of establishment is not usually cut.