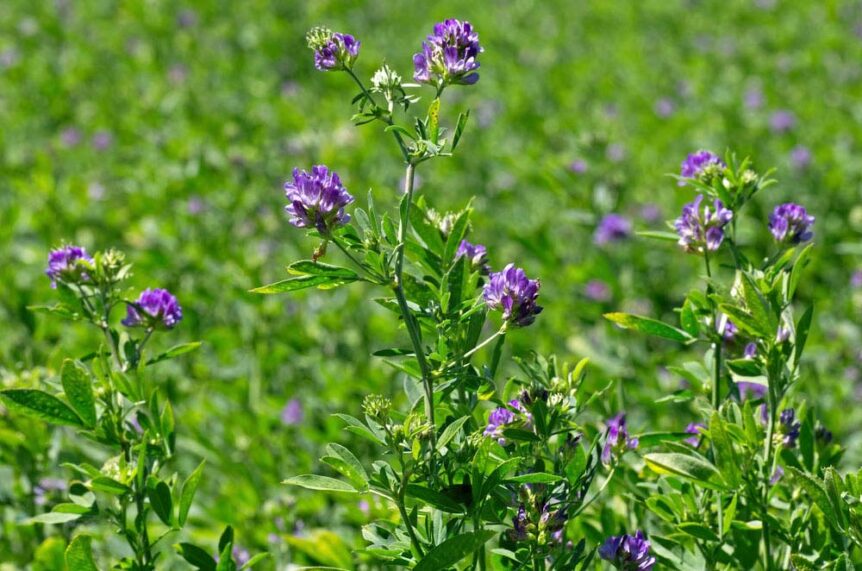 Alfalfa is one of the most used forage for hay and feed production in Ontario, and best management practices are a very important aspect for producers. This project will be looking at different row spacing for alfalfa and sulphur fertilization. Sulphur has become an increasing area of interest for producers.  According to soil tests, most areas in northern Ontario are deficient in sulphur, and that can affect yields of several different crops. Alfalfa has an uptake of 35 lbs/ac of sulphur every year, therefore if it is not receiving the correct amount, it will suffer in plant health and yield production. Alfalfa is also very sensitive to light and air quantities in beginning stages of life. By increasing the row spacing of alfalfa, we may be able to increase the yield simply by allowing more light and air into each row during establishment years. This project will be a combination of both of those treatments, by applying different rates of sulphur to each row spacing and documenting the results on several locations in northern Ontario; Algoma, Thunder Bay and Rainy River.

Spacing order for the alfalfa will be:

There will not be a harvest in the first year of establishment.

This trial will be duplicated at the Lakehead University Agricultural Research Station (LUARS) in Thunder Bay District and the Emo Agricultural Research Station (EARS) in the Rainy River District. This trial will also be conducted on farm in the Algoma region by RAIN, but the trials will be separated into two locations: one looking at just sulphur and one looking at just row spacing. There is a greater potential for more producers in northern Ontario to start growing, or to expand their current alfalfa crops if this project proves a yield increase simply by adding sulphur or increasing the planting spacing.