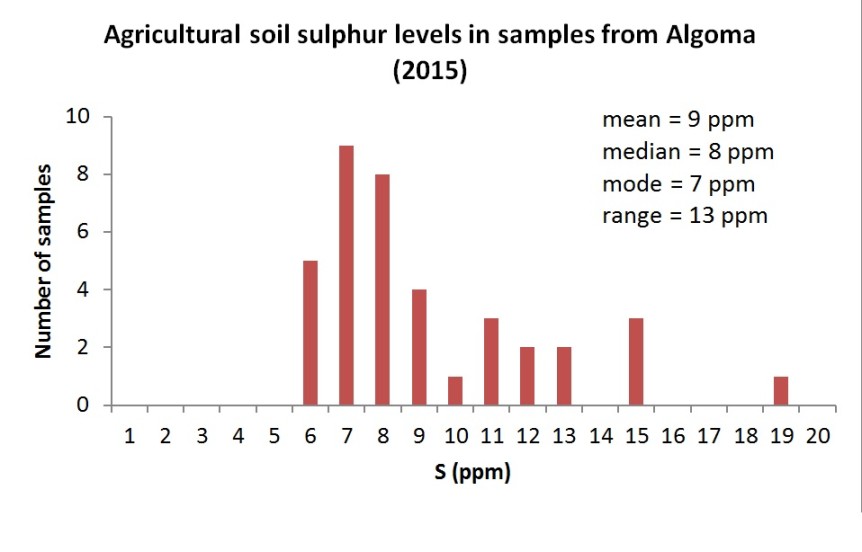 In the past, sulphur (S) was not typically a limiting nutrient for agricultural production in most of Ontario. Air-borne sulphur emissions created acid rain and snow, which deposited 8 -13 kg/ha of SO4 annually. In addition to reduced air pollution, commercial fertilizers are more refined and deposit less sulphur than older blends. There is growing interest in determining whether the sulphur status of agricultural soils across the province (including in the Algoma district) is adequate to meet crop requirements.

During the course of RAIN’s 2015 field research activities, 38 soil samples from 6 farms were collected. 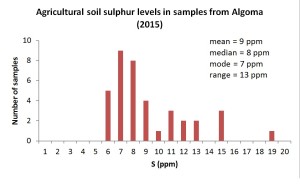 Currently there is no accredited soil sulphur test for Ontario. However, the lab provided some guidance as to productive soil sulphur levels by ranking each value on a scale from very low to very high. All but the two highest levels were ranked as very low. One of the soils at 15 ppm was ranked as low, and the soil with 19 ppm rated very high. This suggests an optimal range of 16 – 18 ppm of S.

Plants need sulphur to form amino acids, develop enzymes and vitamins, fix nitrogen (legumes only), produce seeds, and make chlorophyll for photosynthesis. The ratio of carbon to sulphur (C:S) and nitrogen to sulphur (N:S) in the soil can affect a plant’s ability to take up the sulphur it needs. For carbon, a ratio of more than 200:1 can cause a sulphur deficiency. In western Canada, many growers apply nitrogen in a ratio of 6 or 8:1 to prevent deficiency symptoms. Typical N:S ratios in plant tissue are between 7:1 and 15:1.

Research conducted at the Thunder Bay Agricultural Research Station observed that canola responded positively to elemental S, but response was inconsistent2. Another study looking at alfalfa observed that ammonium sulfate gave higher dry matter yields per hectare than either urea or ammonium nitrate3. In the first year of the trial, the ammonium nitrate also gave alfalfa a significantly higher protein content3.

In 2014, RAIN conducted a sulphur trial with soybean to determine if there was a yield response. Fertilizer treatments were: a) 25 kg/ha S; b) 30 kg/ha P, 20 kg/ha K, and 25 kg/ha S; or c) no fertilizer (control). While the highest yields were observed in the plots treated with P-K-S, none of the yield differences were statistically significant. 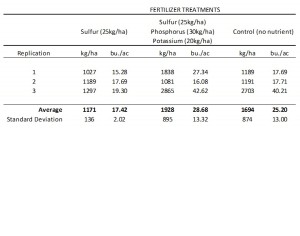 Going forward, RAIN would like to build on this knowledge by conducting some field research trials examining forage crop responses to sulphur applications. We are seeking input and ideas to shape our research focus and target questions producers in Algoma would like to have answered.