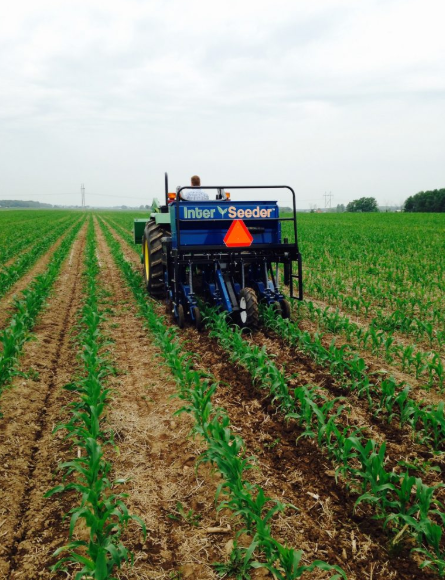 Due to the short growing season and colder temperatures in northern Ontario, cover crops are not always an option. Cover crop is defined as ‘a crop grown for the protection and enrichment of the soil’. Normally, the underseeded/interseeded crop gets started, is established with good roots, then goes dormant, while the cash crop (corn) shades them. Once the cash crop is harvested, the underseeded crop is ready to grow again. High value crops such as corn or soybeans are not generally used for cover crop. There may, however, be an opportunity for a double crop/interseeding/cover crop in corn, for northern Ontario.
Due to continued advancement in agriculture for the north, there are several varieties of corn that can be grown well up here, despite the shorter growing season. The timeline for establishing corn and cover crop is very minimal to avoid competition. It is important to establish the cover crop early enough that it yields good growth and establishment before the corn canopy closes over.

The corn was planted for this trial on June 1st, 2022, at a lower seeding rate than conventionally seeded corn would be. One acre of corn was planted at 25,000 seeds/acre at 30inch row spacing vs the regular 30,000 seeds/acre at 25inch row spacing. The hybrid of corn is Pioneer P8034 which is a shorter corn hybrid with an upright leaf structure to aid in better growth for the inter-seeded crop (red clover and annual ryegrass.)

Due to the high value of corn, and the high demand it has for nutrients and the right amount of sunlight and air, the interseeded crop will most likely not produce as it normally would if situated somewhere else. The interseeded crop, may not act specifically as a second great value crop. It may be more suited for environmental benefits, such as erosion control, increase soil organic matter, water infiltration, benefit microbes, weed control, etc. By having an interseeded crop, it will help with erosion control by deflecting the rain and wind away form the soil, while the roots from the crop hold the soil and nutrients in place.
Due to the spacing needed for a successful corn crop, the seeding method is another big factor for this project. Other research on this topic has shown that modifying commercial no-till drills by removing drill openers that would run over the corn while leaving three drill rows units between 30’’ spacing is a simple but highly effective method. This trial will also be looking at seeding methods of the interseeded crop, including modified no-till drill, modified grain drill and broadcasting the seed at an increased rate of 25-30% to make up for the reduced seed to soil contact.